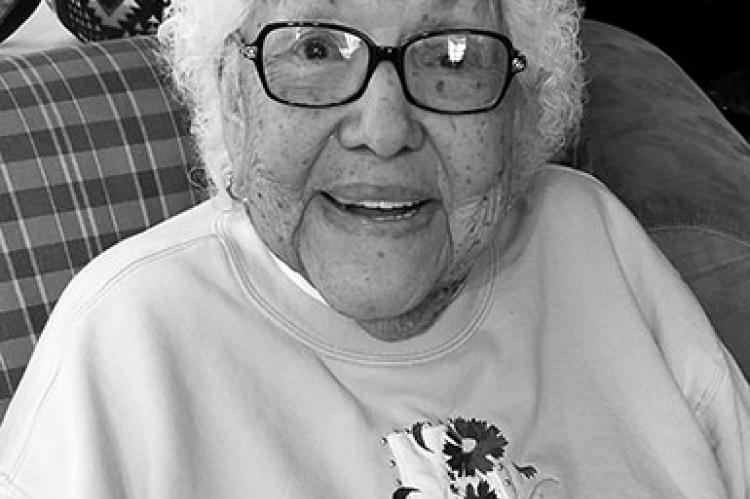 Mary Jane Harjo Black was 95 years young when she departed from this world to eternal life on November 24, 2020.
She was born on October 14, 1925 in Paden Oklahoma to Cheparney and Loske` Harjo. Mary grew up in Henryetta Oklahoma and later attended Eufaula Boarding School. She graduated high school from Haskell Indian School in Lawrence Kansas and obtained her cosmetology license soon after graduation. Mary was a skilled beauty operator but was also a talented trained seamstress. She could replicate any pattern with a few glances and dressed herself, children and grandchildren in the latest fashions and tailored styles.

Mary was a devoted wife and married her best friend Kenneth E. Black on May 3, 1954.  Together they created a beautiful life and raised two twin girls, Deloris Black Ferguson and Doris Black Unap, who they loved and cherished all their living days. Mary traveled to many places in the United States with her husband during his career and continued her travels later in life with her daughters and son-in-law. She was so proud of her husband, daughters, and grandchildren’s accomplishments. She always provided support and love for her family and friends and was a true home maker, the epicenter, and matriarch of her large family. Mary was beloved and well-known by all in her community. An attentive grandmother, Mary was nicked named “GG” by her great grandchildren, a title she was very proud to hold. They will miss her laugh, her fun and competitive spirit. She was a great sport when playing Monopoly, and never cheated her grandkids when she was the banker.

She enjoyed playing bingo and seemed to win a jackpot on almost every occasion she played. When asked what her secret to winning was, she would reply, “I just believe I am going to win, and so I do.” That was her spirit; confident and courageous. Mary held a unique resilience that she carried with her during the hardships of the great depression and later in life as she battled and won the fight again breast cancer.  She was a survivor and champion of life like no other.

Mary was a citizen of the Creek and Seminole nations, fluent speaker of her Mvskoke language and descendant of the Beaver Clan.  Mary was also known to converse in Otoe after being taught by her husband Kenneth.
Mary is preceded in death by her late husband Kenneth E. Black, parents Cheparney and Loske` Harjo, siblings Lillie Harjo, Norah Harjo, Jesse Harjo, and Virgil “Blue” Harjo.

A viewing for friends and family members will be held at the Poteet Funeral Home in Pawnee Oklahoma on Wednesday, November 26 from 11:00 a.m. to 7:00 p.m. and Friday, November 27 from 9:00 a.m. to 1:00 p.m.
A graveside service, officiated by Bryce Pickering, will be held on Friday, November 27 at 2:00 p.m. at the Otoe Cemetery off Highway 177. Jimmy Atkins will also be speaking for the family. The family would like to recognize, Julia Tah, for her many years of friendship to their mother Mary.

Those who wish to caravan with the family to the graveside service are encouraged to meet at 1:00 p.m. at Poteet Funeral Home in Pawnee.

The family thanks everyone for social distancing and your willingness to keep loved ones safe during these trying times. Face masks are required to be worn at all times during viewings and the graveside service. Services were entrusted to the Poteet Funeral Home and Cremation Services, friends can leave a memory for the family at www.poteetfuneralhome.com